-
0
Why is Augmented Reality (AR) in Healthcare?

Both AR and VR have an aptitude for changing healthcare for the better in the future, they just have different functions in it. In the case of AR, the use of technology in medicine and healthcare is basically a natural consequence of the technological development and data boom. Plenty of information, but also very specific kind of data has been flooding physicians for years. The paper format was changed for electronic health records (EHR), but the information flow remained very static so far. It must become more and more seamless and help the healing process. Patients’ lives can’t depend on whether the doctor can access the latest and most relevant data, and AR can help us with it.

As data access and information processing technologies are already on an advanced level, the next step is to bring significant, even life-saving information into the doctors’ field of vision. For example, if there is a complicated operation, there might be very little time for checking whether the patient has a certain type of allergy. So, instead of searching among papers or in the EMR, the surgeon could see the relevant data on his AR screen in seconds. Yet, not only data but also other types of medical information, such as the location of the veins or organs might be projected onto the environment helping physicians doing their job.

One of the most popular platforms for working out medical AR solutions is the Google Glass, with which Rafael Grossmann carried out the first operation streamed live in 2013.  The wearable computer with an optical head-mounted display was made available to testers and developers in 2013. However, it failed to catch on with the broader mainstream market, in the last years, the old technology is taking on a new function in healthcare

Since December 2013, doctors used Google Glass at Boston’s Beth Israel Deaconness Medical Center to see whether it can facilitate either doctor-patient interactions or the input of data. Huge QR codes hang on the walls and doors of patient rooms. These can be scanned when the doctor steps into the room, and Google Glass transmits the relevant patient records and information. The device makes it possible for doctors to keep eye contact with the patient while receiving pertinent information right away.

Orca Health is an innovative, Utah-based mobile software company established in 2010 for bridging the gap in the patient-healthcare provider relationship. Its 12 mobile applications and integrated tools educate patients to make better decisions about their health. EyeDecide is one of the venture’s medical app, which uses the camera display for simulating the impact of specific conditions on a person’s vision.

Using apps like EyeDecide, doctors can show a simulation of a patient’s vision. For instance, the app can demonstrate the impact of Cataract or AMD and thus help patients understand their actual medical state. 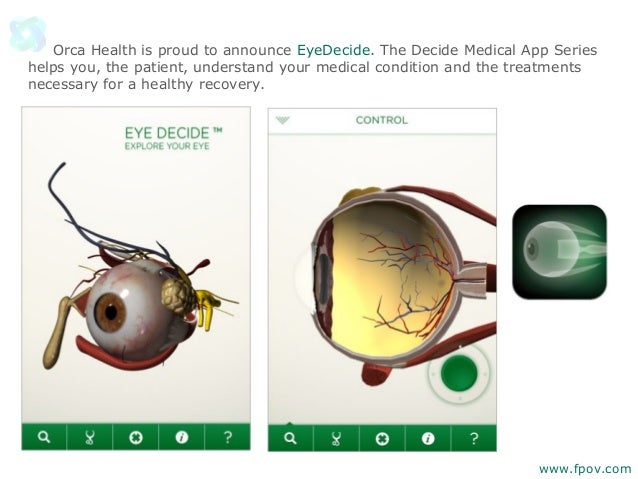 The Massachusetts-based technology company, established in 2013, has been focusing on the application of pioneering neuroscience with the latest in wearable technology, in particular, Google Glass.

The start-up builds brain science-driven software to transform wearables into neuro-assistive devices for the educational challenges of autism. Their aim is to teach life skills to children and adults on the autism spectrum. They developed a unique software suite, the “Empowered Brain” aiming to help children with their social skills, language, and positive behaviors. The software contains powerful data collection and analytic tools allowing for customized feedback for the child.

Medsights Tech is working on making X-ray visible. The company developed a software to test the feasibility of using AR to create accurate 3-dimensional reconstructions of tumors. The complex image reconstructing technology basically empowers surgeons with x-ray views – without any radiation exposure, in real time. It has been designed to be intuitive for practitioners of various fields, including technicians, surgeons, and other medical specialists. It has also been tested for other, such as skin and subcutaneous, head and neck, GI tract, endocrine and other retroperitoneal pathologies. 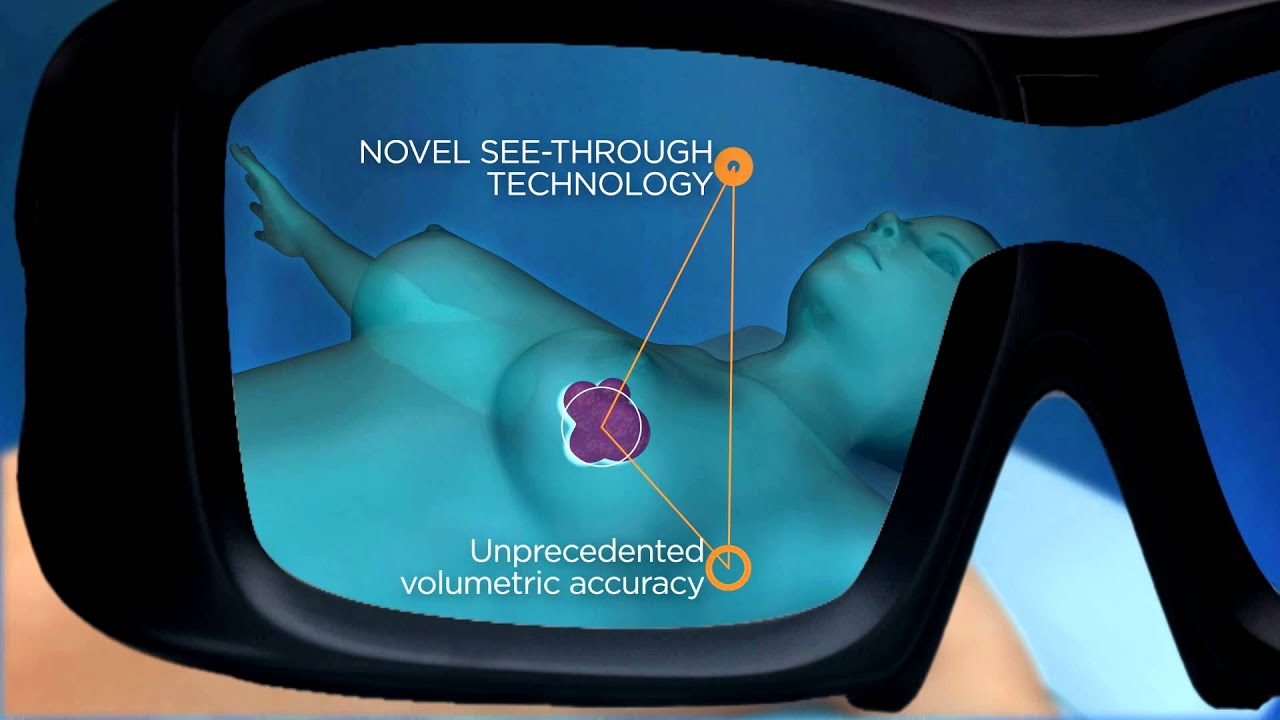 Many people have a great fear of blood tests mainly because they are afraid that the nurse can not find the vein at the first time.

AccuVein is using AR technology to make both nurses’ and patients’ lives easier. The company’s marketing specialist, Vinny Luciano said 40% of IVs (intravenous injections) miss the vein on the first stick, with the numbers getting worse for children and the elderly. AccuVein uses AR by using a handheld scanner that projects over skin and shows nurses and doctors where veins are in the patients’ bodies. Luciano estimates that it’s been used on more than 10 million patients, making finding a vein on the first stick 3.5x more likely.

Case Western Reserve University and the Cleveland Clinic have partnered with Microsoft to release a HoloLens app called HoloAnatomy to visualize the human body in an easy and spectacular way. The app offers such an amazing insight into the biology of the human organism.

With Microsoft’s HoloLens VR Headset, app users are able to see everything from muscles to the tiniest veins before their eyes on a dynamic holographic model. It will revolutionize medical education, as students will be able to see the human body in 3D instead of the usual working method: black-and-white pictures and written descriptions in books.

The company, established in 2012 and based in Mountain View, California, develops diagnostic, surgical planning and image guided treatment applications. EchoPixel says that its technology amplifies human expertise and improves both clinical efficacy and workflow. 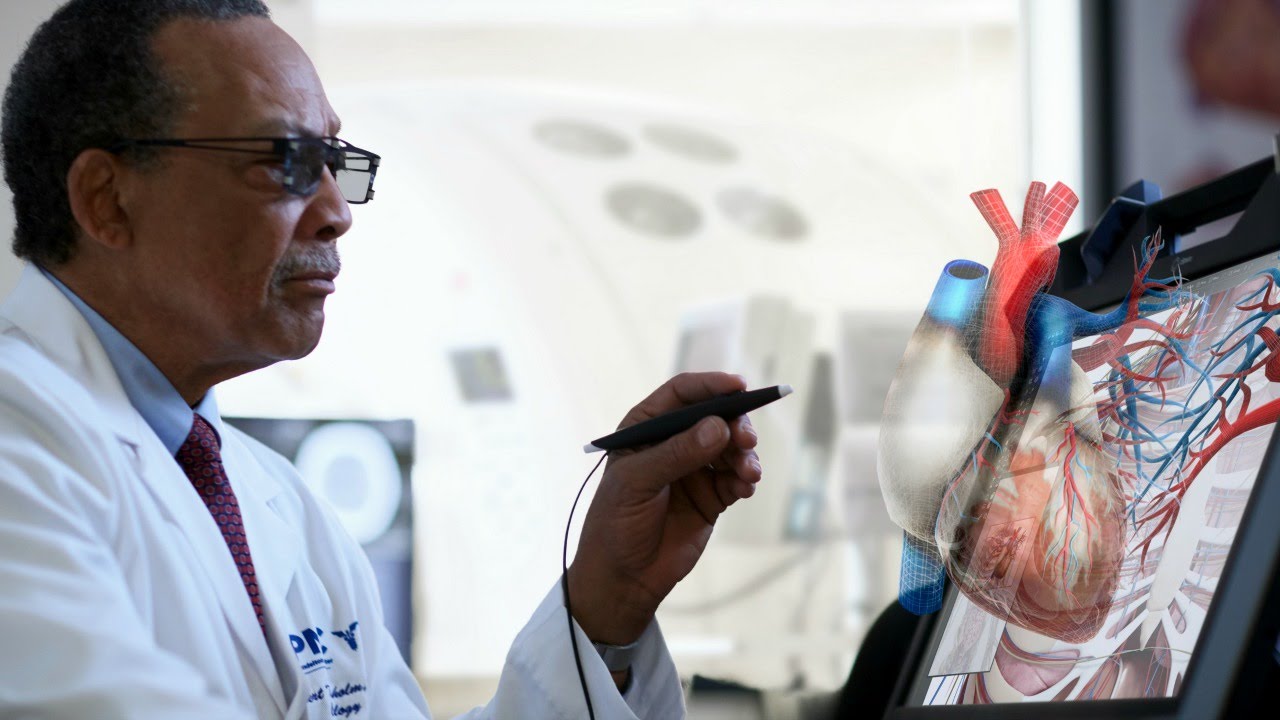 The San Francisco-based company aims to harness the power of the Google Glass to make healthcare more patient-centric and cut down on administration. Augmedix provides a technology-enabled documentation service for doctors and health systems, so physicians do not have to check their computers during patient visits, while medical notes are still generated in real time.

As a result, the burden of administration on medical professionals is eased: they can leave their workplace on time every day, complete the administrative requirements easily, while they can still diagnose and treat more patients.

The company is considered a pioneer of the Augmented interactive Reality (AiR) smart glasses platform, which is designed to enhance productivity.

AiR Glasses enable users to view critical work information right in their field-of-view and interact with it using familiar gestures, voice commands, and motion tracking. With the AiR Enterprise Suite, users can collaborate with remote experts via video calls and receive guidance through real-time image annotations to increase efficiency.

The name of the start-up established in 2015 combines Artificial Intelligence (AI), and the ancient Egyptian mythological being known as the Eye of Ra (RA). Aira offers solutions to the visually impaired to create the possibility to live a more independent life.

The team uses deep learning algorithms for describing the environment to the user, read out text, recognize faces or notify about obstacles. Using a pair of smart glasses or a phone camera, the system allows an Aira ‘agent’ to see what the blind person sees in real-time, and then talk them through whatever situation they’re in.

Anyone studying medicine has to learn anatomy. There are many ways to do it — flash cards, textbooks, charts etc… Those are tried and true methods, but Arnatomy  wants to make them better. They’re working on a few projects, including an app that uses OCR to match a word like femur, for example, with visuals and info on the bone, or one that lets users manipulate a “a tangible skeletal model of bones affixed with augmented reality (AR) targets,” according to their site. 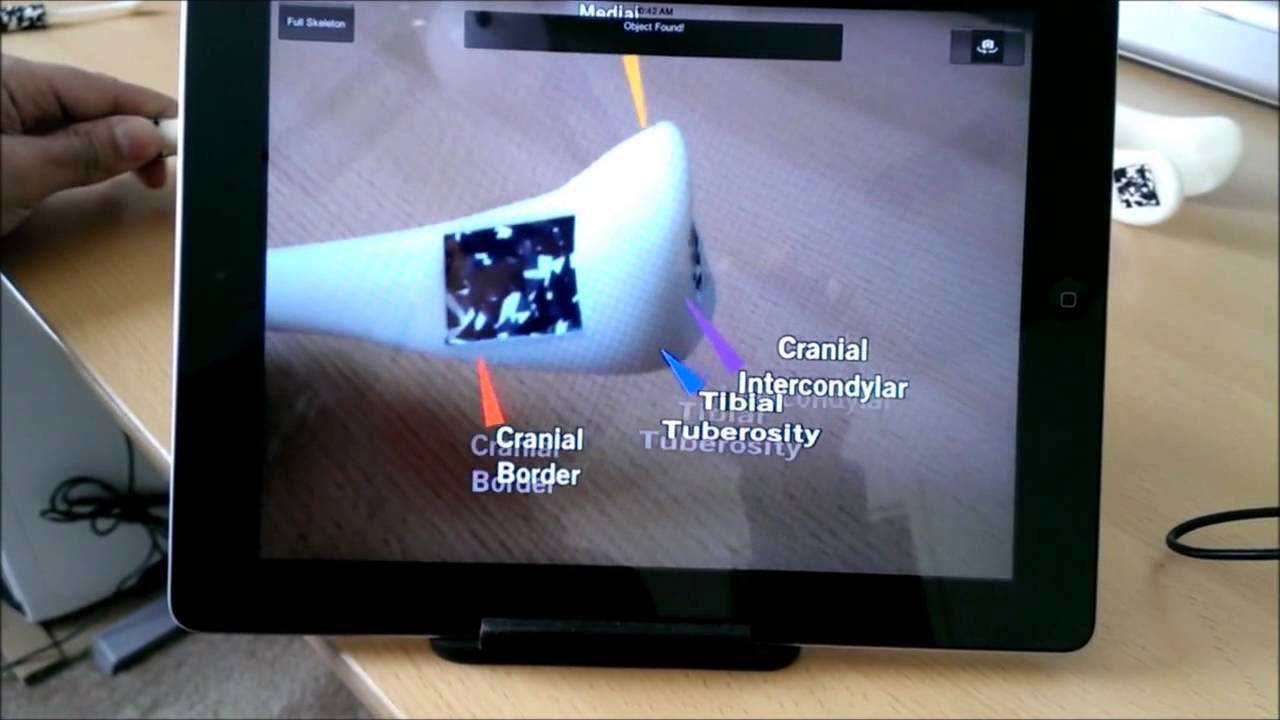 The realities that we ignore about…

What is augmented reality (AR)?